A phased-array ultrasonic testing (PAUT) system has been fielded for the first time at LLNL in support of Sierra Nevada containment-vessel inspection, demonstrating this new LLNL capability and expertise.

PAUT is an advanced method of ultrasonic testing that has applications in industrial nondestructive testing. Common applications include finding flaws in manufactured materials such as welds. The PAUT apparatus is a beamforming oscillator that produces an electronic signal consisting of pulses of sine waves oscillating at an ultrasonic frequency, which is applied to an array of 128 ultrasonic transducers in a small-array probe. Each transducer can be pulsed independently in sequence along a row so that a pattern of constructive interference is set up that results in a beam projected at a set angle. The timing (or “phase”) of the pulses emitted by each transducer is delay-controlled by a microprocessor. This enables the beam to be focused and steered electronically, swept like a search-light through an object being examined. The data collected from multiple beams are combined to make a visual image showing a slice through the object.

The PAUT results are used to validate the weld integrity of the Sierra Nevada experiments’ containment vessels upon receipt from the manufacturer, and to determine fitness for service post-experiment for potential vessel reuse. The Sierra Nevada multi-laboratory collaboration is focused on assisting LLNL in fielding a subcritical plutonium experiment at the Nevada National Security Site in 2018. This will be the first LLNL subcritical experiment since 2003. 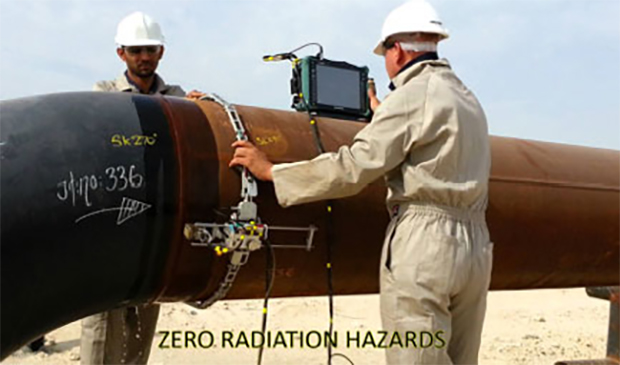